Sale on canvas prints! Use code ABCXYZ at checkout for a special discount!

A Day At The Track

Previous Next View All 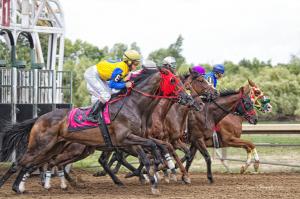 "The Fort" has been thrilling horse racing fans since 1897 but this was one of my very first trips to this historic track. A much smaller facility than the more modern Woodbine Racetrack, it gives off a sense of history that you can feel as soon as you walk through the doors. The track's infield is filled with flowers and lakes and provides a beautiful backdrop when shooting the races. Almost all of the races are run on the dirt track which runs right up along the rail where race fans can get up close to the horses as they fly down the backstretch pushing hard for the finish line. As a photographer, it makes for some really great shooting! It was such a thrill to have the starting gate pull up a mere 20 feet from where I was standing and it gave me the opportunity to get some stunning "out of the gate" shots.
Sadly, the track is set to close at the end of the 2012 race season. After the government pulled the plug on the Ontario Lottery and Gaming Commission Slots at the track, it's no longer a viable option to stay open. It's not only going to affect hundreds of people who depend on the track for their livelihood, but it puts the lives of the horses that called "The Fort" home at risk.
It's a piece of Canadian history that is going to be missed.